The Apollo Hill Project is located in the heart of the world-class Eastern Goldfields district in Western Australia. 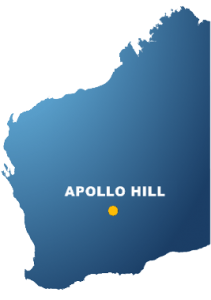 Access to the Project is via heading northeast from Kalgoorlie along the bituminised goldfields Highway. The Project is readily accessible by way of a network of dirt roads, station roads and historical mining tracks.

A number of multi million ounce gold deposits are known in the district. 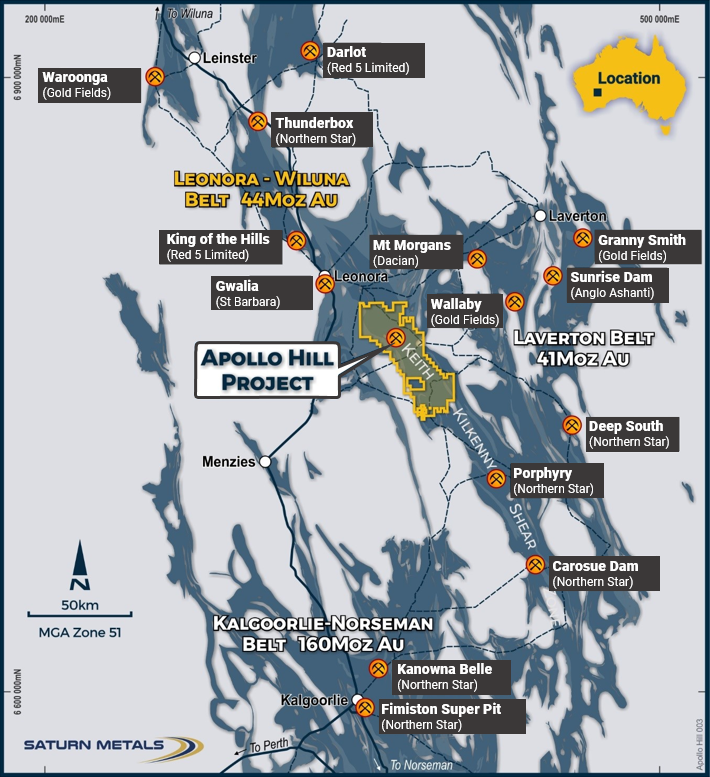 The Apollo Hill Project comprises of 31 highly prospective gold exploration and prospecting licenses (approximately 1,600km² of ground), including two mining leases and twelve water exploration leases. The Project’s major asset is the Apollo Hill 2018 JORC Compliant Indicated and Inferred Mineral Resource of 35.9 Mt @ 0.8g/t Au for 944,000 ounces of gold using a cut-off grade of 0.4g/t Au reported within a pit shell (maximum depth of the resource at 180m below surface).

The Apollo Hill Tenements are close to excellent Infrastructure and form contiguous tenure. 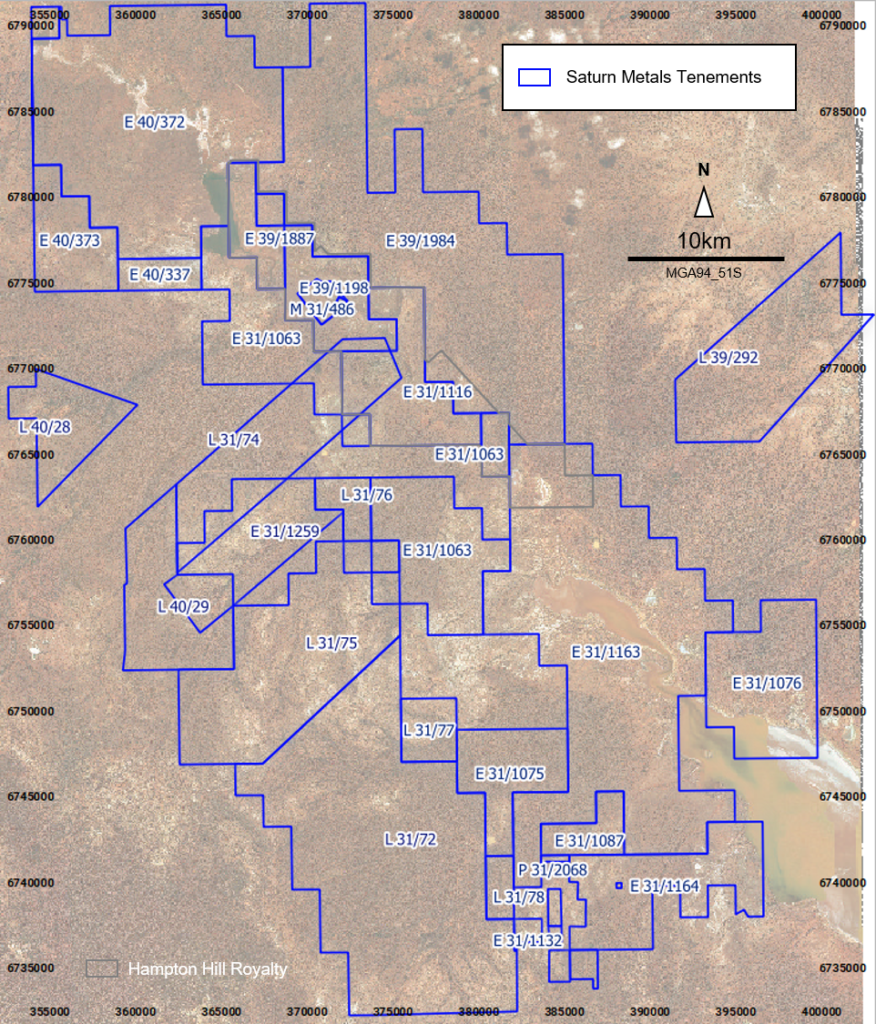 Saturn has effectively added 439,000 oz to the Apollo Hill Mineral Resource in just under three years from listing with 83,000 m of RC and diamond drilling.

For further detailed information in respect to the Resource, refer to the ASX Announcement ‘Apollo Hill Gold Resource Upgraded to 944,000oz’ (28 January 2021) on this website which includes the relevant JORC compliance Table 1. 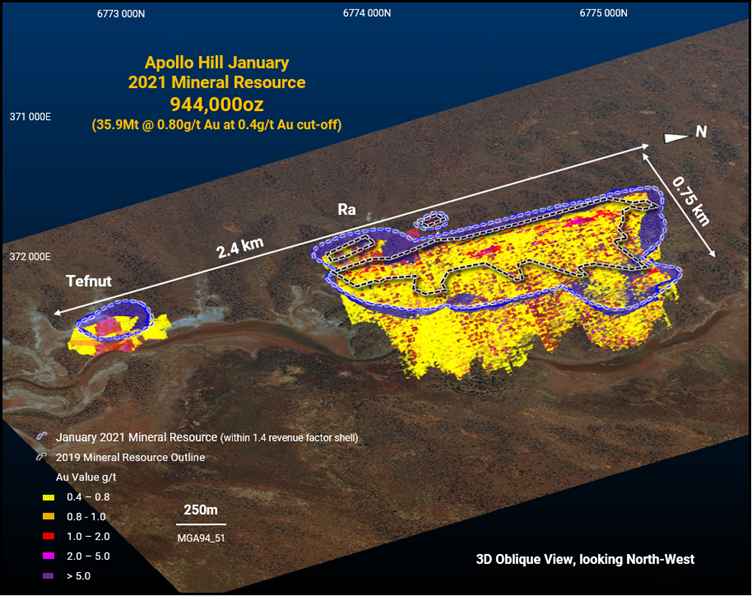 Saturn’s is undertaking one of its most most aggressive and successful drill campaigns since listing.  Work is focussing on cultivating the next step in Apollo Hill’s mineral resource profile. 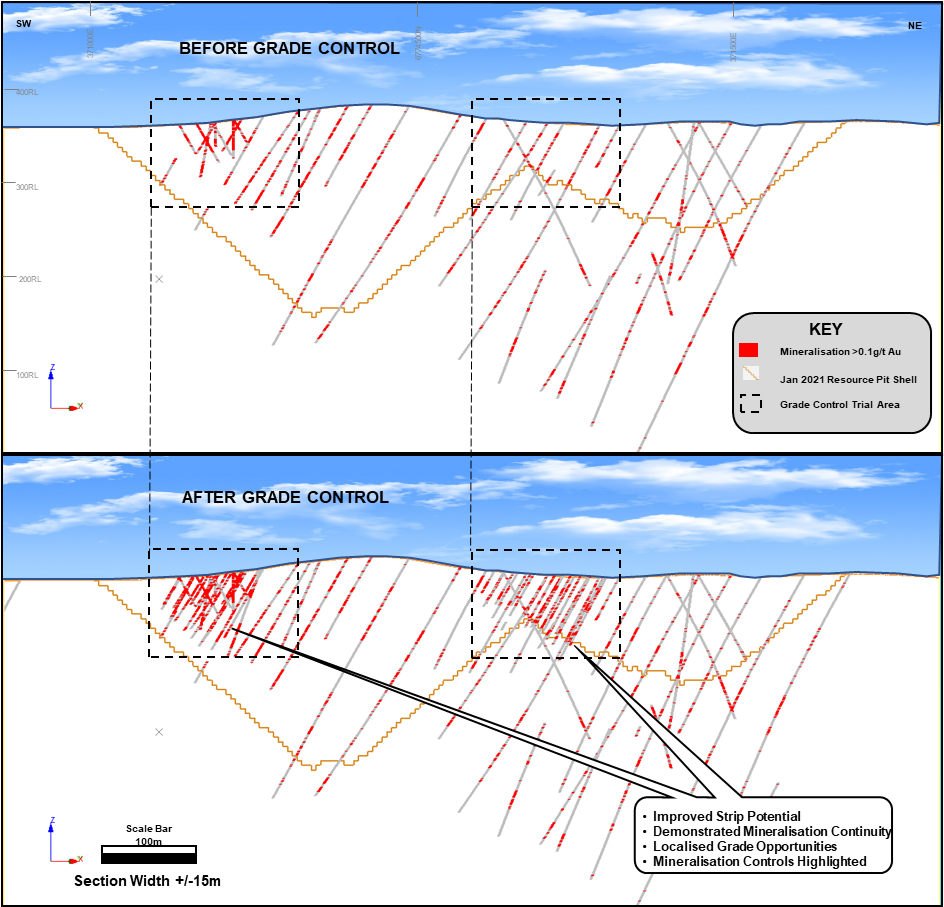 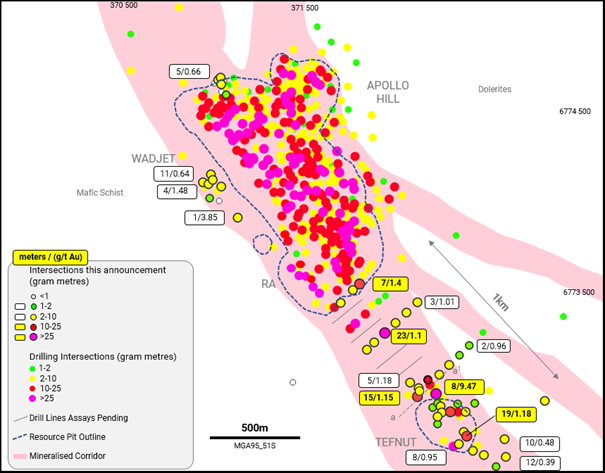 Resource extension drilling and results and holes for which assays remain pending relative to the published resource. 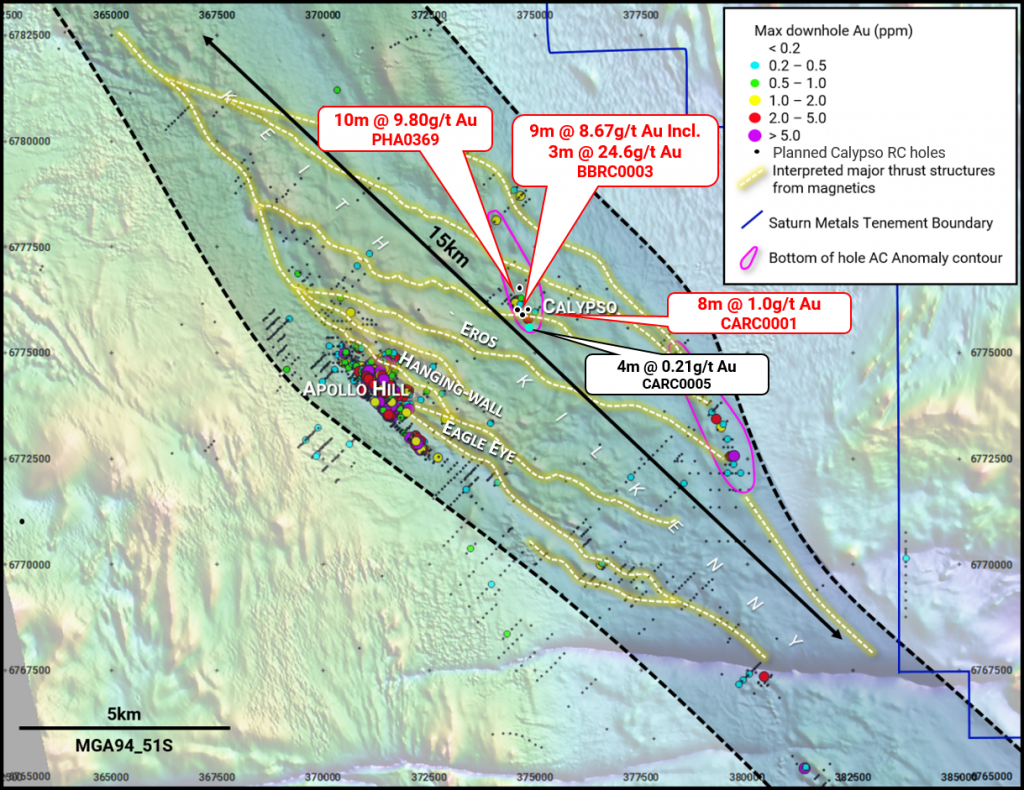 The Tenement holdings are dissected by the district scale, Keith Kilkenny Lineament, which is a complex system of north west oriented shearing, faulting and gold prospective geology.

This Lineament is known to be associated with significant gold deposits in the region including St Barbara’s Sons of Gwalia Mine some 40-50km to the north-west (2.4 million ounces of gold in reserves at 30 June 2017), and Saracen’s Carosue Dam Operation approximately 130km to the south-east (+1Moz production to date through various owners); locations illustrated below.

At the Apollo Hill Project, this shear zone is mainly concealed beneath transported overburden and previous surface geochemical sampling and shallow RAB/AC drilling has consequently been of limited effectiveness. Saturn Metals is in the process of creating new geological and geophysical data sets which have the potential to completely re-write the geology and prospectivity of our strategic land package. This could offer much opportunity for further exploration success. 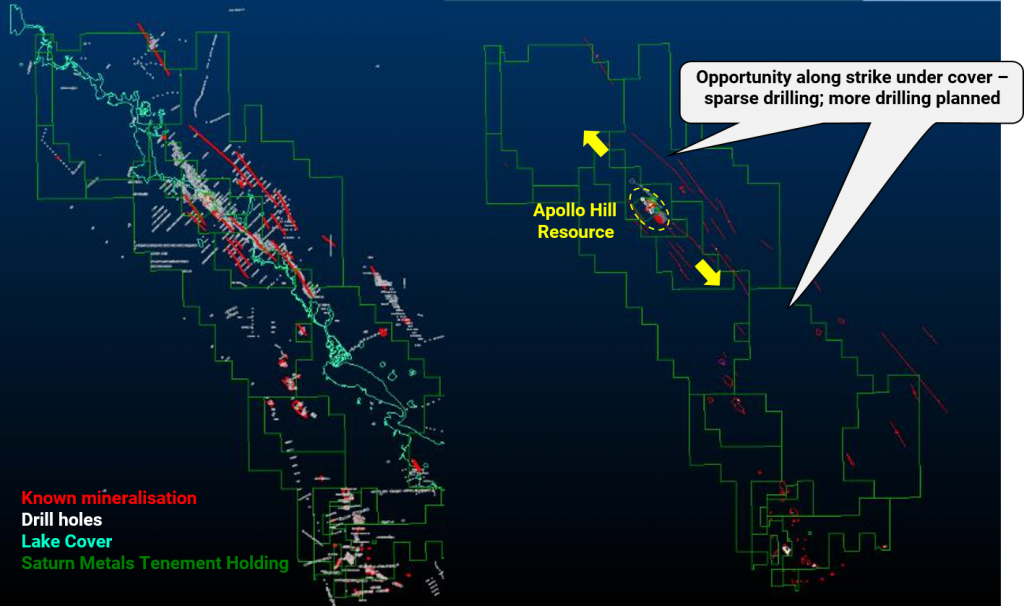 As a result of geological interaction with the above described Keith Kilkenny Lineament, the tenement package contains many areas of structural and lithological complexity theoretically favourable for gold mineralisation.

Prospects identified within the Project include:

These prospects are summarised on the following pages and Quarterly reports. For further details, please refer to Saturn’s Quarterly Report and the Independent Geologist’s Report of the Prospectus which are published on this website.

Approximately 3.5km east of the Apollo Hill Resource area, a number of exciting intersections exist in an isolated line of RC, AC and Diamond drilling.  Importantly these intersections sit directly over the interpreted location of the Keith Kilkenny shear zone and present an excellent target for follow up work (general location of Calypso prospect illustrated in camp scale opportunity section of the website).

An intersection of 10m @ 9.8g/t Au from 89m including 5m @ 17.85g/t Au from 90m is recorded near the bottom of Aircore drill hole PHA0369.  Recent RC Drilling in hole BBRC0003 returned an intersection of 1m @ 1.1g.t in a similar geological position.  The below image also shows a wide (~100m) zone of scattered lower grade intersections which have had no follow up drilling down dip.

As well as being open at depth, these intersections are effectively completely open along strike to the north and south with only limited shallow RAB and AC drilling into the cover sequence. 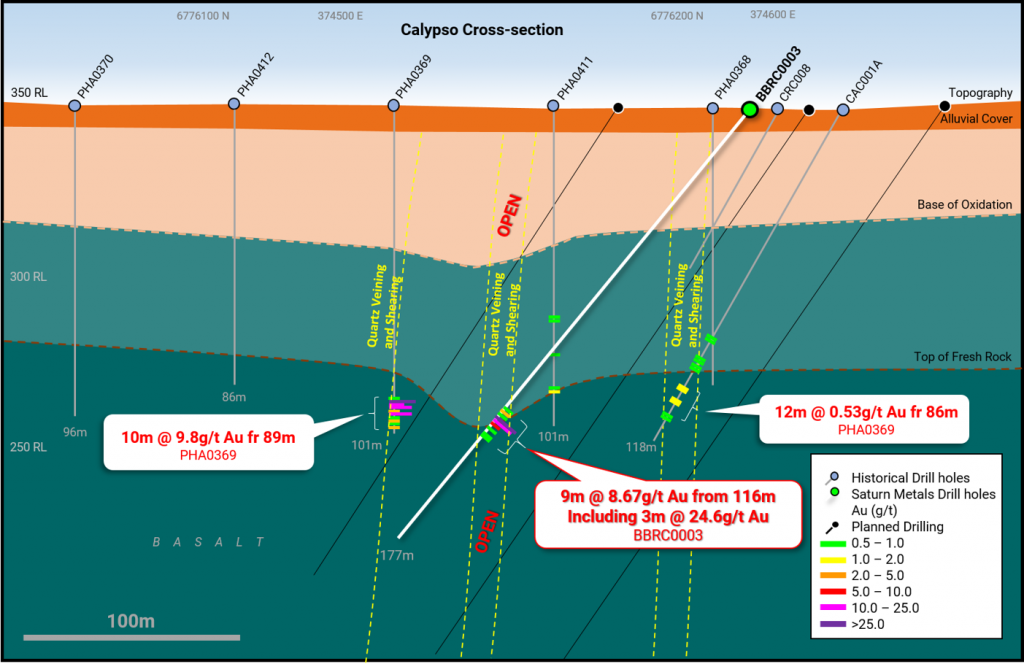 The Yerilla district hosts several historic gold occurrences and old workings.  References in Department of Mines and Petroleum tenement reports indicate that historic production from this area was over 17,700oz or 551Kg of gold.

Prospects on Saturn’s Tenements include the Queen of the Earth, Black Gin and McGregor Historic Mines/Prospects (500m long trend) and the Fenton South Mine.

The below image illustrates other material RC intersections over a 5km strike length along the Yerilla Shear.  Further work is required to fully assess this highly anomalous area and trace multiple structures along strike to the north where the cover sequence is known to thin. 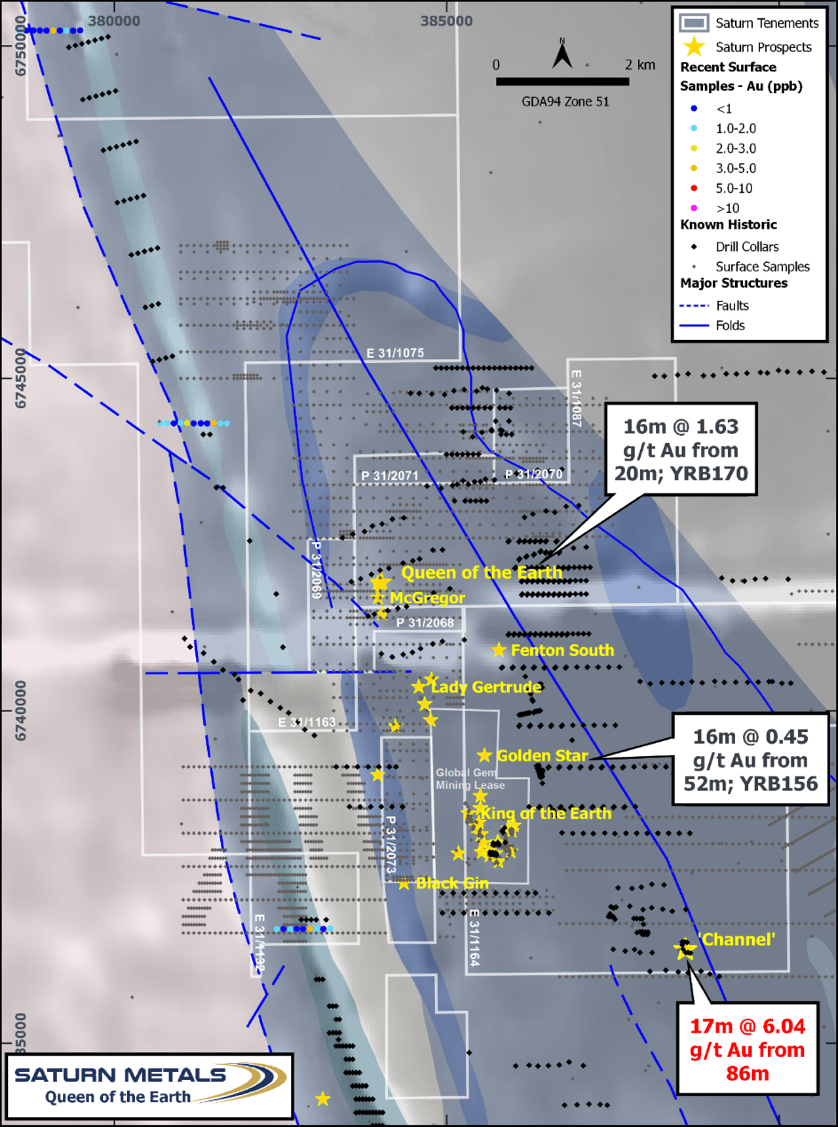 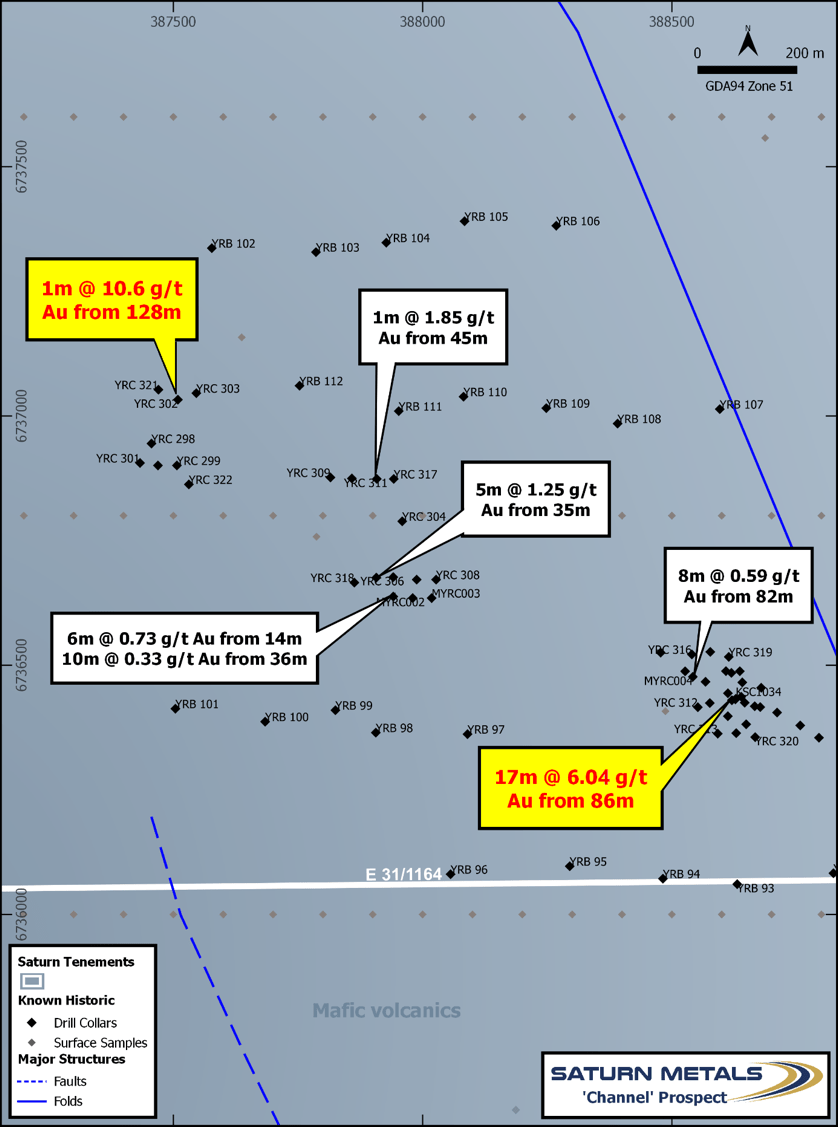 Gold mineralisation and strong anomalism is noted over a 3.7 km strike length and includes the 40G, Roscommon, Quartz Ridge and Golden Emu Prospects.  Little or no modern exploration has been applied to this trend.

Limited follow up shallow RAB drilling at the 40G Prospect (37 holes to a maximum depth of 56 m) also returned encouraging results including:

Importantly, mineralisation is open down dip and to the south of the 8m @ 0.9g/t Au intercept.

These intersections are calculated as a weighted average based on down hole sample length. Down hole widths are reported and may not represent true thickness; other dill intersections are not considered to be material and were of lower tenor.

According to references in Department of Mines tenement reports, historic production from Roscommon and Old Emu is recorded at 192 tonnes @ 10.9g/t Au for 2.1Kg of gold.

Mineralisation is largely hosted in granitoid bodies within the Apollo Hill Greenstone suite.  Parallels can be drawn to the Sunrise Dam granitoid geological setting south of Laverton.  Anglo Ashanti’s Sunrise Dam is a relatively recent discovery (1988), and it has produced over 6Moz of gold to date. 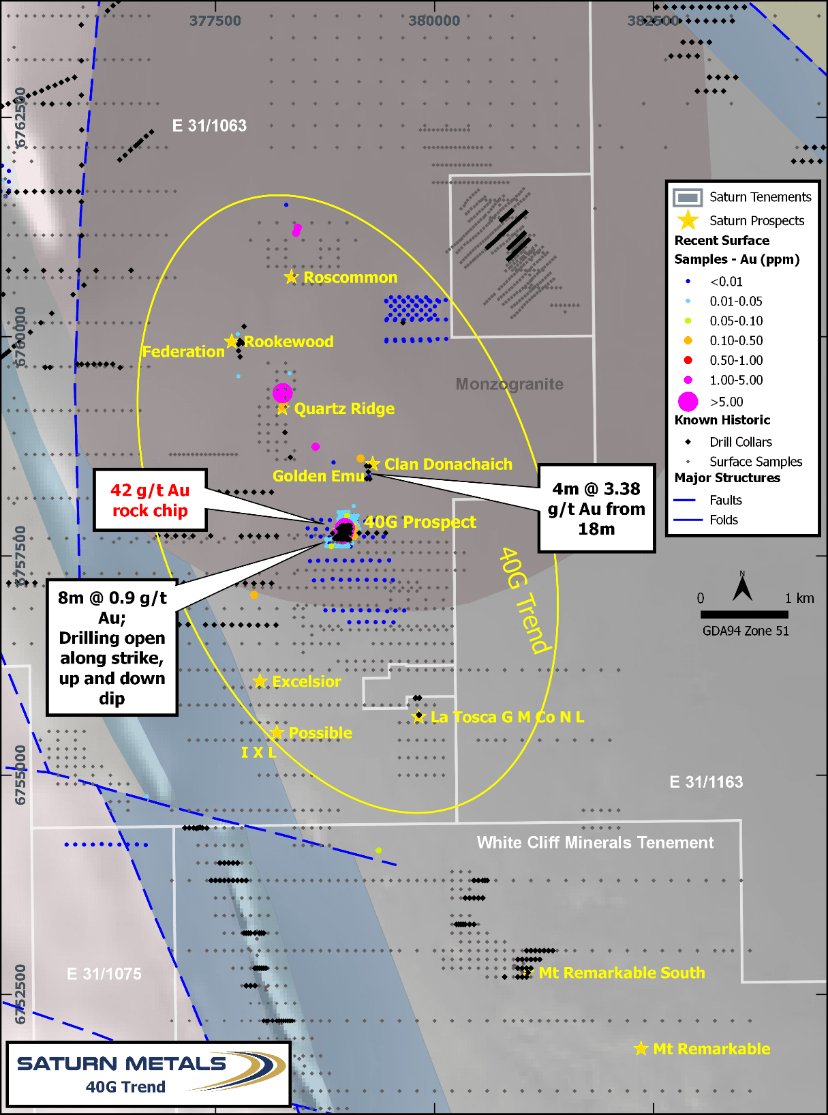 The Artemis area provides Saturn with a Greenfields discovery opportunity. Subtle geochemical anomalism at Artemis is located within the greater Hades Shear zone approximately 3km north west of the Apollo Hill resource area. Anomalism and minor gold workings are known on the Hera, Artemis and Ares Trends. The Gaia-Ares-Iris trend in particular, could hold great potential as it is interpreted to be the structural intersection of the north-west extension of the Apollo Hill Shear and continuation of the same gold prospective greenstone sequence as that that hosts the Apollo Hill and Ra Resources. 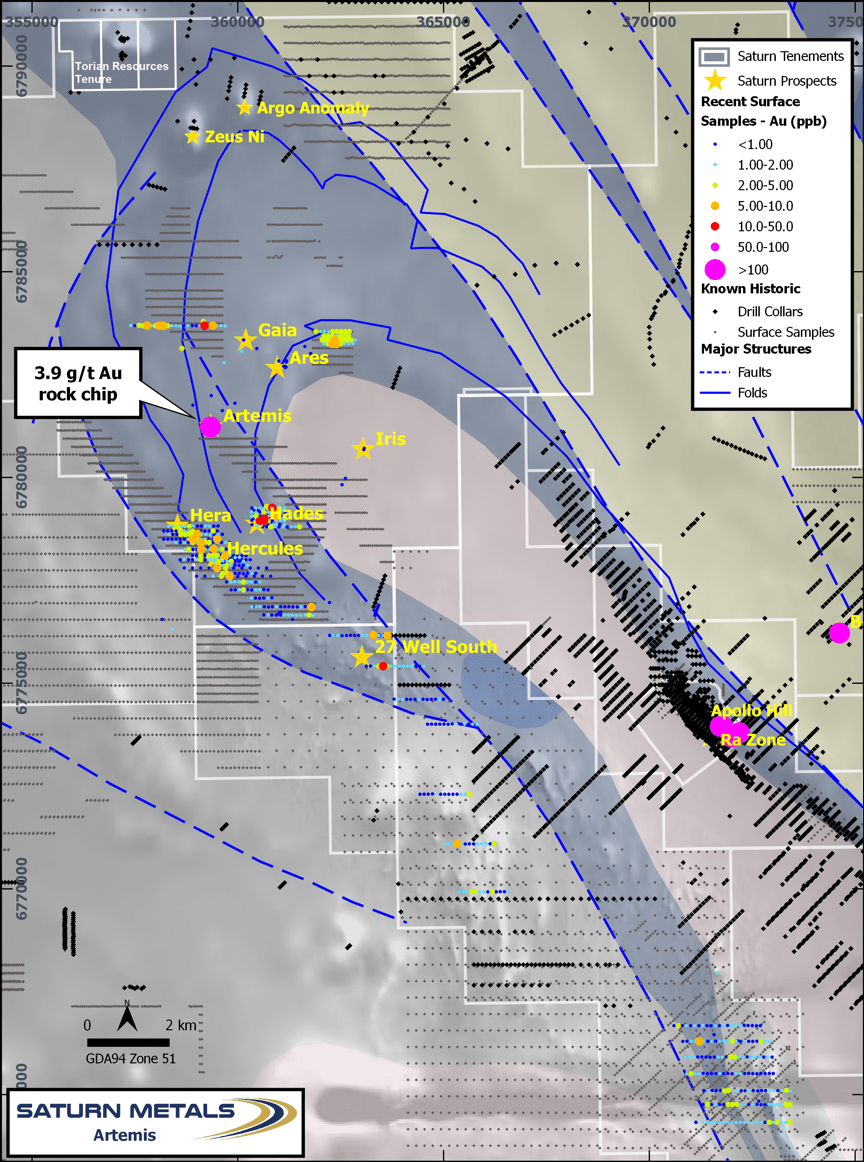 Enter your email to get the latest updates from Saturn Metals